The last of Summer’s heat could be felt the morning that we visited Jac Semmler’s Frankston garden, but the shift into Autumn was seen in the plants and in Jac’s work. As attendees arrived, they were welcomed to have a sneak peek of the garden along with morning tea and a good chat.

From only a quick walk around Jac’s garden the use of garden ‘rooms’ is apparent, this suburban block is packed with all types of plants (Jac describes herself as a “Plant Maximist”) and serves many functions, the perennial garden out the front, a patio, a bath area, potting room, veggie beds, the  secret shade garden – all have their own spaces but also are tied together with an entanglement of colours and textures provided by Jac’s plantings.

Jac currently works for The Plant Society, features on the Plant Hunter and formerly worked for The Diggers Club, so it’s little surprise that her garden is a masterclass in diversity and experimentation. In her tour, Jac told us of the origins of her garden, moving a ute load of plants from South Australia, to her new home in Frankston that had some of the structure that Jac would use (fences and paths) but also had a decent amount of lawn and poor soil. There’s no lawn anymore, and the fences and paths are almost hidden from all the green-life thriving as a result of the soil remediation. Along with the initial composting in the early days of the garden, Jac ‘mulches’ with a thick layer of compost, returning nutrient to the soil and suppressing undesirable seed germination, both weeds and self-seeded annuals and perennials (gaps are left for self-seeded plants that are wanted in that space).

Jac’s garden changes not only seasonally, but annually, as she moves perennials around the garden when dormant to ‘paint a new picture’ next growing season. Layering is also used to great effect, tall plants like Magnolias, Cotinus and Fennel form a boundary and upper layer while the mid-section is lush with different colours and textures from grasses and Salvias in the front yard, to potted Agave and Dahlias out the back. Underneath it all are bulbs waiting to emerge when the season strikes.

We had a delightful morning being guided through Jac’s garden, and left being better informed on gardening techniques and feeling inspired to experiment with plants. Encouraging Women in Horticulture would like to thank Jac Semmler for accepting us into her space and giving us her time. 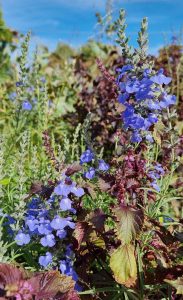 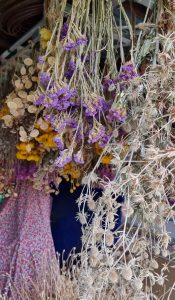 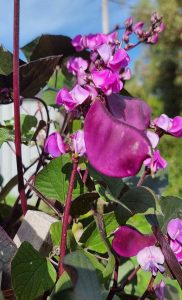 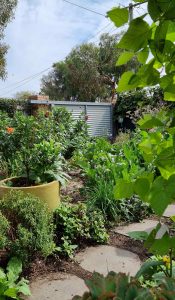 “Jac is such an inspirational gardener. So generous with her time and horticulture knowledge, left me in awe of what she has created in such a short time. I felt I walked away with so many new ideas and a new appreciation for a seasonal garden.” 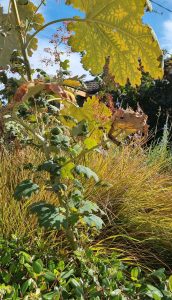 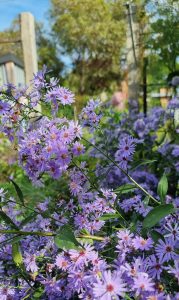