In 2020 my husband and I bought a house. While we waited for settlement, I would lay awake at night thinking about the garden, my garden. When I did fall asleep, I would dream of bulbs in flower, birds bathing and feasting, I’d dream of sitting on my patio reading in the sun with my dog next to me. I have an eclectic taste in most things, and plants are no exception, so each area of the garden was being carved out in astral space, the native garden, the shade garden. The largest area with the most sun, the premium position? That space is for my herb garden. So, you can imagine my delight when I soaked up January’s morning sun, cup of tea in one hand, stroking my dog with the other, and a pile of herb books on the table in front of me. The subject for that morning’s study? Verbascum thapsus, Mullein. 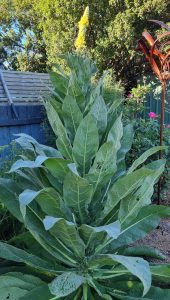 Mullein is not a herb that is widely known. I first encountered it in a garden I was working in. There were a few that had self-seeded on the edges of the garden beds in their first year of growth, and so still just a rosette form, but their large, soft, grey leaves caught my attention. When I found out Mullein has a long history as a medicinal herb, it was top of the list for my herb garden. Now is probably a good time to mention that I am not a qualified herbalist, and I am not a medical professional. Any information I provide here is not medical advice.

Verbascum comes from the Scrophulariaceae family, known as the Figwort family. With common names like Blanket Leaf, Feltwort and Velvet Dock you might gather that Mullein leaves are SOFT, so soft that that the Latin word mollis, that it is thought mullein comes from, means “soft”. As I alluded to earlier, Mullein is a biennial plant, taking two years to complete its life cycle. The first year large blue, green, grey leaves form a rosette getting to about 1m wide by 600mm high. In the Summer of its second year a flower spike will form, eventually reaching 2m tall (sometimes taller) and covered in small yellow flowers. This feature of the plant is reflected in its common names Aaron’s Rod and Jupiter’s Staff. Native to Europe and Asia, Mullein prefers full sun and rocky or sandy soils. Not often grown as a garden plant, it’s more commonly found as a weed. It does have a weed potential and has become a problem in some places, but I think it’s easily controlled by removing the flower spike before seeds spread.

I stumbled upon my Mullein friend while exploring Forestedge Permaculture Nursery and was overjoyed. I was unsure as to if it would transplant well or tolerate my composted soil and attention, but I had to give it a go. To my delight it transplanted well and was growing at an astonishing rate. Thinking back, with the speed it was growing it should have come as no surprise to me, but my biennial plant started to form a flower spike in December, it’s first December! I had done little research into the plant at this stage, being a first-rate procrastinator, I thought I had 2 years to live with and learn from this plant. I have read that in warm climates Mullein can be an annual, and maybe the root disturbance from transplanting was a trigger, I don’t know, but flowers were coming fast, and I needed to learn about this herb’s medicinal qualities. 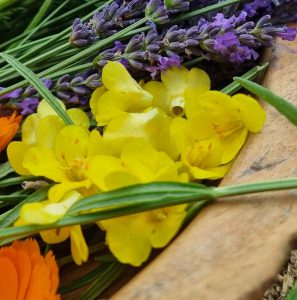 The leaves and flowers are both harvested and used medicinally, however the seeds are toxic and should never be included in any treatment. In the first year (typically) leaves are harvested and can be made into a tincture (alcohol infusion), tea (careful to strain out the hairs that makes the leaves so soft) or smoked. Flowers are delicately plucked from the stalk and can be used in tea with the leaves or infused in oil to treat earaches. Mullein is used for its antibacterial, antiviral qualities, but mostly as an anti-inflammatory, demulcent (tissue coating) herb with an expectorant effect (make you cough up mucus). These properties make it a useful treatment for respiratory issues such as bronchitis as well as coughs and other throat problems, treating the issue and soothing the tissue. It’s antibacterial and soothing qualities also make it useful for topical treatment on bruises, burns, wounds and haemorrhoids.

So, it’s the end of Summer now and I have dried Mullein leaves and flowers ready for winter coughs. I have removed the flower stalks to harvest the seed and when they are completely dry I will coat them in beeswax and herbs to burn as a torch. This is the last gift the Mullein gives us, known as Hag Tapers but not known as to if they were used by ‘hags’ or ‘witches’, or if they were used to repel them. Regardless, they have been embraced by the modern magic community and are used in celebration and ritual. 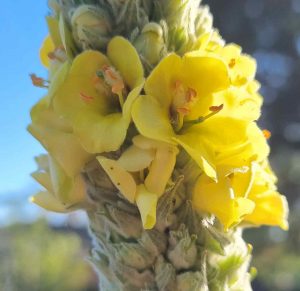 In my opinion, Mullein is a wonderful plant; it offers us healing both medicinally and, like most plants, healing of the soul. I loved visiting it in the garden, stroking its velvety leaves. It’s presence when flowering commanded attention, always getting comments from friends on how wonderfully striking its yellow spire was, and on closer inspection how many bees it had foraging from it.  I am sad to see my Mullein go, but the gifts it has given me will continue through the year until I raise the next generation and start the journey again.